Pensacola Homes and Condos for Sale

As one of the oldest cities in United State’s history, Pensacola features not just over 450 years of history, but also within its city limits, you will find culture, excitement, adventure, and nightlife. It’s home to the Blue Angels, Seville Square, a large military presence, and some of the most beautiful beaches in the world.

In addition to its many thriving businesses, Downtown Pensacola maintains an active calendar of events. Take in a live show at the historic Saenger Theatre, walk through the art galleries, or listen to live music at Seville Square, and there’s plenty more to do including shopping, dining, or enjoying an afternoon run.

It seems like the fun never stops at Pensacola Beach. You can enjoy a relaxing day building sand castles on the sugar white sands, fish off the 1,471 foot Pensacola Beach Pier, shop on the boardwalk, or dance the night away. And there is plenty more to do including boating, parasailing, jet skiing, and dolphin watching. Regardless of how you spend your time on Pensacola Island, one thing you must do is eat, and there is no shortage of restaurants to choose from. You can find everything from pizza to seafood with a side of Bushwhacker, Pensacola’s featured drink.

While the Blue Angels perform perilous aviation maneuvers all over the world, they only call Pensacola their home. The team made up of Navy and Marine, officers perform their rolls, passes, and configurations in shows from March to November awing audiences with heart-stopping moves, but locals can see them practice most Tuesday and Wednesday mornings for free.

Pensacola’s Naval Air Station is an active military base that employs both civilians and military personnel. Its grounds are open to civilians with the proper ID and has two main attractions.

Take a tour of the lighthouse, built in 1859, and don’t forget your camera, so you can capture the view from the top. Then explore the museum where you can learn about Pensacola’s military history and archeology. If you’re lucky, or not so lucky, you could encounter one of the lighthouses rumored ghosts as it is been called one of the most haunted places in America.

In 2012, the Carolina Mudcats made Pensacola their home under the new name Pensacola Blue Wahoo’s. This minor league baseball team unites fun, family, and baseball in a state of the art stadium that was named “2012 Ballpark of the Year” by Baseballparks.com. The stadium hosts a variety of community events including baseball centered youth camps, Kazoo’s Grand Slam Reading Program, appearances by Kazoo, the team mascot, concerts, and the Craft Beer Festival.

Concrete block with brick accents, a carport with outdoor utility room situated on a corner lot with a large yard featuring 4 bedrooms and 1/2 baths, open kitchen to the ...

Investment opportunity! Mobile home on just over a .25 acre tucked into a quiet neighborhood.

Amazing opportunity with this almost new end unit two bedroom/two and a half bathroom townhome! This townhome comes with everything you need and more to move in and feel ...

Come see this large four bedroom three bath home conveniently located central everything in Pensacola! It is located just minutes from the Interstate, shopping and all yo...

Looking for a new that is like NEW!! Well here it is!!! Completely renovated Brick and Block home ~ The large windows in the front of the home allow the light to give the...

Almost 1/2 acre on navigable canal leading to Perdido Bay. ST Augustine Grass on the half of lot near water. No wetlands determination has been done.

Welcome home to this unique property. This 3 bedroom 2 bathroom home is located on 1.66 acres with mature trees and a creek with a pond behind the home. The detached ga...

Welcome home! This three bedroom and two bath home has been meticulously maintained and is ready for new owners. Walking up to the front door, you will note the mature an...

Welcome to Bluebird Haven! A new community centrally located off Nine Mile Road and Untreiner Avenue in Pensacola. The Cali is a fabulous 4 bed, 2 bath floorplan with a n...

DEEDED BAYFRONT ACCESS! This Four Bedroom, Three Full Bath Brick home with a Screen Enclosed Gunite Pool is made for entertaining! As you walk up to the front door you no...

Add this income producing property to your portfolio. Currently rented through HUD section 8 housing at $700 a month. Tenants are month to month. Please do not disturb th...

Ready to call Pensacola home? This home is nestled in a beautiful neighborhood close to dining, shopping, golf, and only minutes from the interstate. Space! Space! Space!...

A lovely downstairs condo with 3 bedrooms and 2 bath unit in Brigantine Place. Location is great and near the University of West Florida (UWF), West Florida hospital, and... 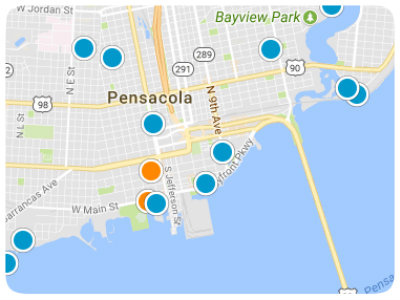