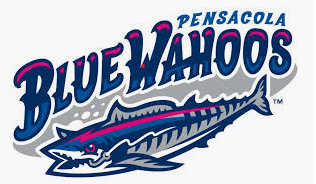 Pensacola Blue Wahoos is a AA baseball team in Pensacola since April 5, 2012. They are a part of the Southern League and are currently affiliated with the Minnesota Twins. When they made their transition from Zebulon, NC (Carolina Mudcats) to Pensacola, FL they were affiliated with the Cincinnati Reds (2012-2018). The transition to get the Blue Wahoos wasn't easy... "In 2010, Quint Studer, owner of the Pensacola Pelicans independent baseball team, acquired the Mudcats franchise in a complicated series of moves and purchases designed to bring affiliated Double-A baseball to Pensacola. First, he sold the Pelicans to a group in Amarillo, Texas, where they became the Amarillo Sox in 2011. General manager of the Pelicans, J. C. Evers, provided the success that would prove Pensacola a viable minor league town. Studer then bought the Carolina Mudcats franchise.  He had to facilitate the move of the Kinston Indians to Zebulon, where they assumed the Carolina Mudcats name and branding. Additionally, as Pensacola is within the franchise territory of the Mobile Bay Bears, Studer paid that team a sum. The arrangements cost a total of $2 million.[1][2]" A few short years later, Quint Studer decided to bring on the local PGA professional Bubba Watson and named him co-founder in January 2015.

Where can you catch a game?

This stadium is located in downtown Pensacola and is  arguably the nicest AA stadium in the country. Admiral Fetterman Field broke ground on September 17, 2009 and opened on April 5, 2012. The capacity is 5,038 and all seats look out into the beautiful bay.